Four young musicians who met, following their studies, in the Southbank Sinfonia bookend charming works by Schubert and Mozart with two Czech works. Gideon Klein, who was born in 1919, was possibly the most talented of all the Terezin composers to perish in Auschwitz and this Trio, which has been played several times in Leamington, is a wonderful example of his genius. Jindřich Feld (1925-2007) taught composition at the Prague Conservatory and had posts abroad in Australia, various European countries, Japan and USA and was very active after the Velvet Revolution. The musicians come from Scotland, Czech Republic, Latvia and Albania – a truly European line-up which we must continue to encourage.

Concert supported by the Low-Beer Trust

The Martinů String Quartet returns to Leamington following an outstanding concert at the end of November and joins up again with Gemma Rosefield to repeat their striking interpretation of Schubert’s ever popular Quintet and to introduce the audience to the Quintet by Glazunov, written in 1892, during the golden age of romantic Russian music. The concert begins with Mozart’s evergreen, Divertimento in D, written in 1772 when the great composer was just 16 years old and already held the post of Court Concertmaster to Hieronymus Coloredo, Prince Archbishop of Salzburg. 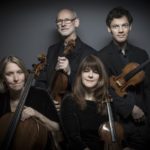 There can be no finer beginning to the thirtieth Festival than a concert from Tasmin Little, and we look forward to welcoming Andrey Gugnin to Leamington for the first time. Tasmin has for years delighted audiences in the area, playing at Charlecote Park, in Leamington, Leamington Hastings, Stratford-upon-Avon, Warwick Arts Centre and Warwick town. A pupil of Yehudi Menuhin, she has championed Delius and, more recently, Szymanowski and includes both of them in the wide-ranging programme that opens the Festival. Awarded the OBE in 2012 and with appearances all over the world, she can, ”justly be regarded as Britain’s finest violinist.” (The Independent). She has performed with Andrey Gugnin in Australia and throughout the UK, and we have a solo recital from Andrey to look forward to as our Monday lunchtime concert.