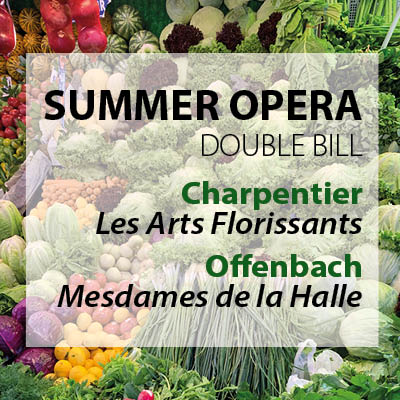 Warwick’s summer opera house presents a contrasting double bill with Marc-Antoine Charpentier’s baroque classic followed by Jacques Offenbach’s one act comedy written in the same year as his ever popular Orpheus in the Underworld. In a romp around a Parisian market, we meet an ostentatious drum major and three comely market vendors with surprisingly deep voices. With English dialogue and surtitles for arias sung in French.

Pre-show talk at 6.30pm on Charpentier and Les arts florissants by Prof Graham Sadler and Dr Shirley Thompson of the Royal Birmingham Conservatoire.  Free and followed by a glass of French wine.

Tickets: £20 and £1 students all unreserved